'You are the man who caused all this trouble?'

SALEM, N.C.
Who was responsible for "The Shot Heard Round the World?"
Ralph Waldo Emerson originated that phrase in a poem immortalizing the moment April 19, 1775, in Concord, Mass., when Massachusetts patriots opened fire on the British redcoats and began the American Revolution. "The Shot Heard Round the World" has also been applied to the dawn of April 12, 1861, when secessionists in Charleston opened fire on Fort Sumter and began the American Civil War.
Historians generally concur that the first shot on Fort Sumter was a mortar on James Island fired by Capt. George S. James, a native of Laurens County, S.C. James offered the honor to Roger Pryor, a Virginia newspaper editor who was an ardent secessionist, but Pryor replied, "I could not fire the first gun of the war."
However, a man captured by Stoneman's soldiers in Salem, N.C., told a different story. Thomas Wheat was caught April 10, 1865, by Major William Wagner's battalion as they returned from a week-long bridge-burning expedition to Lynchburg, Va.
The Stoneman Gazette's chief war correspondent, Capt. Henry Weand, recorded the scene in his journal:


Among the rebels captured here was Thomas W. Wheat, who had the distinction of having loaded the first gun that fired on Fort Sumter. He was in a South Carolina battery, and captain Hallenquist, who commanded, pulled the lanyard which discharged the gun.  Wheat’s captured comrades told us this, and our good-natured Major Wagner said to Wheat: “So you are the man who caused all this trouble? What did you fire on Fort Sumter for?” “Because I wanted to capture it,” retorted Wheat. With others, he was given his parole and an extra lot of provisions, and started off for his farm, way off on the Oostanaula River [in Georgia].

Thomas Wheat was a sergeant in the First South Carolina Artillery, which was commanded by Gen. Pierre G.T. Beauregard. That's the regiment that fired on Fort Sumter in 1861 and then defended the same fort against Union bombardment in 1863.
Wheat shared his story in 1896 with Montgomery M. Folsom, the Georgia correspondent from the New York Sun, and it was syndicated and published in newspapers across the country. The following clipping is from the Atlanta Constitution Nov. 15, 1896. The famed Atlanta editor Henry Grady was a mentor to Folsom.

CLINGS TO THE GRAY
———
Floyd County Man Still Wears His Old Confederate Overcoat.
———
LOADED FIRST CANNON FIRED
———
Thomas A. Wheat Began War at Fort Sumter and Quit at the End of the Strife.
———

The Star of the West affair that Wheat mentions was a civilian steamship sent to resupply Fort Sumter three weeks after South Carolina voted to secede from the Union. Citadel cadets on Morris Island fired on the ship January 9, 1861, hitting it three times and forcing it to leave Charleston Harbor. Technically, those were the first shots of the Civil War, but they didn't reverberate "round the world" like those of April 12.
Wheat didn't help his credibility by erring on the date and duration of the bombardment. His account that "I was so busy working the guns that I paid little heed to what was going on until the order came to cease firing" does not square with the fact that the bombardment continued for 34 hours—all day, all night, and past noon the following day.
On the other hand, it's impressive that the details he gave to the Yankees in 1865 match those he recited in 1896 to Folsom. He was correct in naming Capt. James H. Hallonquist, a West Point graduate who commanded the Enfilade Battery on Sullivan's Island. Those four cannons pounded Fort Sumter with 1,825 shots—almost one shot every minute.
Regardless of his actual role in "the shot heard round the world," there is wonderful irony in Wheat's claim to have witnessed the surrender of Major Robert Anderson at Fort Sumter. Because the Yankees who captured Wheat on April 10, 1865, in Salem were from the Fifteenth Pennsylvania Volunteer Cavalry, who called themselves "the Anderson Troop" in honor of Major Anderson.


Union Maj. Robert Anderson (1805-1871) should not be confused with Col. Robert Anderson (1741-1813), a Revolutionary war hero who fought in the 1781 Battle of Cowpens and is the namesake for my hometown, Anderson, S.C. Stoneman's cavalry raided Anderson May 1-3, 1865.
―――
NOTE: Wheat's middle initial is listed as H on the regimental rosters maintained by the National Park Service, A according to Folsom's story, and W per Weand. It's also puzzling that Folsom says that Wheat's coat had "I" buttons (for infantry) when the records show that he was in the artillery instead.

NEXT➤ The Medal of Honor and even bigger prizes

Welcome! You are guest number:

If you are just joining us ...

The Stoneman Gazette was a daily online newspaper throughout the 150th anniversary of Stoneman's Raid, a Civil War campaign spanning six Southern states in the spring of 1865. We continue to publish occasionally. This blog includes well over 100 stories, stacked like newspapers with the most recent editions on top. Feel free to explore our history, and come back soon to see what's new.

"The Stoneman Gazette is dedicated to the
memory of everyone touched by Stoneman's Raid—
North or South, military or civilian, free or slave."
—TOM LAYTON
Publisher, proofreader, and paperboy
If you are just joining us (where have you been?!?), may I suggest that you start with one of these links:
MEET OUR STARS, from Abe to Yosemite.
CLICK ON A SECTION TAB (above)
STONEMAN'S ROAD (below): Was your town raided?
UNION MEMORIAL: 37 lives lost during raid
CONFEDERATE MEMORIAL: Over 50 deaths
HISTORIAN: 'Brilliant but inadequately appreciated'
OUR FAVORITE HEADLINES
EYEWITNESS JOURNALS:
► Emma Rankin, Carson House, Marion NC
► Emmala Reed, Anderson SC
► Capt. Henry Weand, our war correspondent.
SEE WHO SHARES YOUR BIRTHDAY (way below)
THE RAIDERS' OWN NEWSPAPERS, from NC, SC and GA
READ IT LIKE A BOOK, in chronological order.

Search The Stoneman Gazette. Enter names, places, or other keywords:

Subscribe to receive emails when we publish new stories: 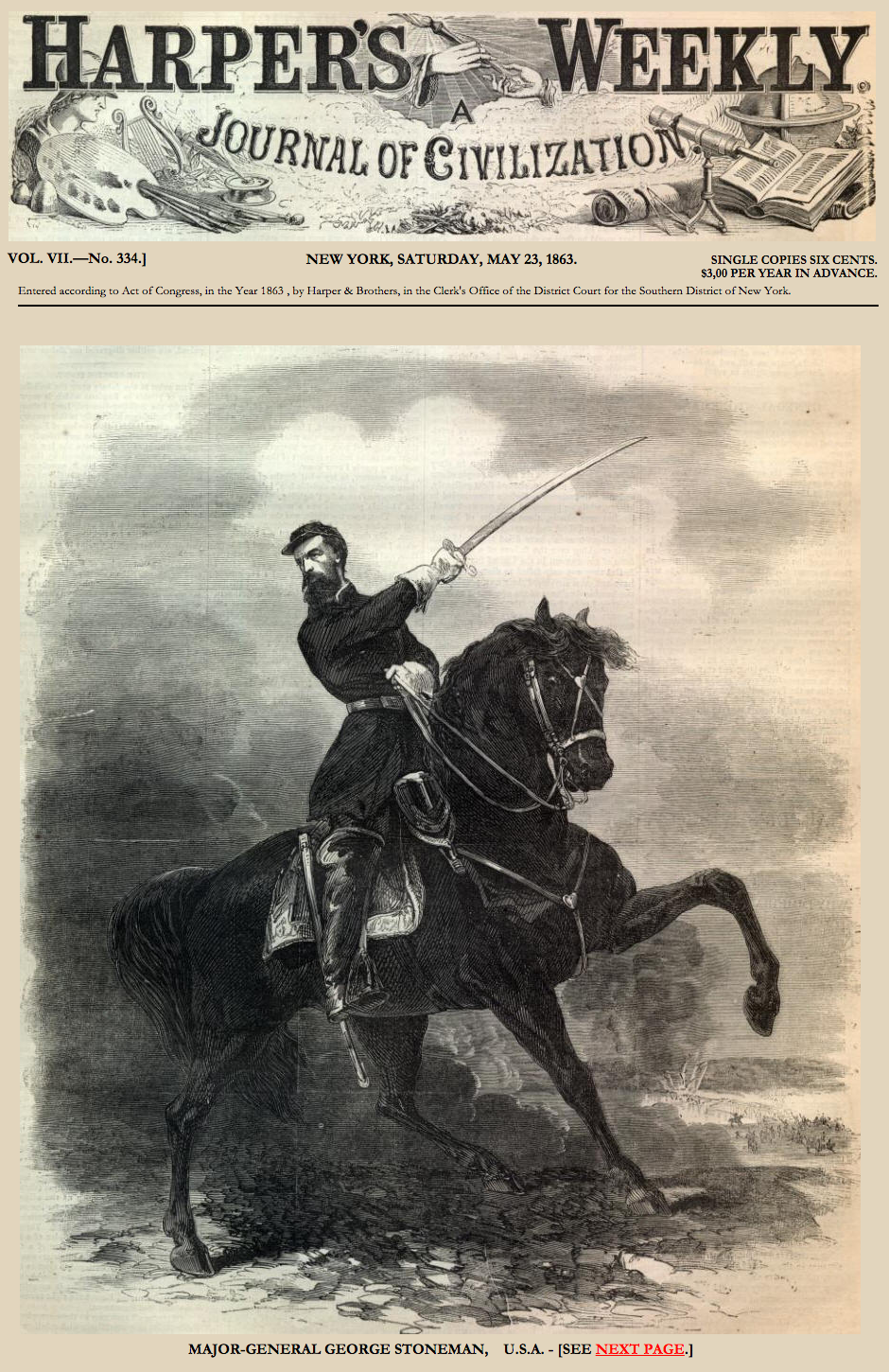 Stoneman's Road: Timeline of the Raid

Most-clicked stories of the past month

Here is what other newspapers have written about the 150th anniversary of Stoneman's Raid:
Watauga Democrat, March 24, 2015
Stoneman raided dozens of towns, but Boone was one of the few his troops occupied. Historian Michael C. Hardy unravels the consequences.
To the Sound of the Guns, March 31, 2015
Craig Swain references The Stoneman Gazette as he blogs about the cavalry's movements from Wilkes County, N.C., to Christiansburg, Va.
Salisbury Post, April 2, 2015
Mark Wineka features The Stoneman Gazette in a story setting the stage for the 150th anniversary of the Battle of Salisbury.
Jamestown News, April 7, 2015
Carol Brooks interviews author C. Michael Briggs, whose book Guilford Under the Stars and Bars details the final days of the war around Greensboro.
Anderson Independent-Mail, April 8, 2015
My longtime colleague Abe Hardesty references The Stoneman Gazette in a story about the ongoing public fascination with the Civil War.
Salisbury Post, April 12, 2015
"We were lucky to have had Stoneman instead of Sherman." Columnist Mark Wineka tells how Stoneman's Raid shaped Salisbury.
Anderson Independent-Mail, May 1, 2015
Abe Hardesty spotlights Stoneman's Raid in my hometown, focusing on one of the last Confederate deaths of the war.
Asheville Citizen-Times, May 3, 2015
Rob Neufeld describes the Yankees as "war criminals" and tells how Asheville still struggles with deep-seated issues manifested during Stoneman's Raid.

Asheville Citizen-Times, April 25, 2016
Rob Neufeld seeks justice for four "colored troops" in Stoneman's rear guard who were executed after being accused of rape.
Salisbury Post, December 8, 2017
Mark Wineka is always quick with a Stoneman story, and he found another gem as the city fire department celebrated its 200th anniversary.
Salisbury Post, June 27, 2017
The search for the Salisbury prison is featured in Archaeology magazine. "We're seeing almost the ghost of the building,” archaeologist Timothy Roberts said.

Thanks to the historians!

Stoneman's Raid has been well-researched and well-documented by some fine historians and writers. Most of these publications can be found online (follow the blue links) or in the special collections at the Appalachian State University library. In the spirit of the raiders and the internet, I have plundered and foraged freely from these sources. The least I can do is to say thanks to:
Rev. John Bailey Adger (1810-1899)
►1899: My Life and Times
William T. Auman (1942-2013)
►2014: Civil War in the North Carolina Quaker Belt
John Preston Arthur (1851-1916)
►1914: Western North Carolina: A History (1710-1913)
►1915: A History of Watauga County, North Carolina

Walter Clark (1846-1924)
►1906: Histories of the Several Regiments and Battalions from North Carolina in the Great War

Libray of Congress
►1861: Slave Population of the Southern States
►1863: Mountain Region of North Carolina and Tennessee. Drawn by Adolph Lindenkohl. Probably the main map that guided Stoneman.
►1865: Complete map of the march of the 1st Brigade, 1st Cavalry Divn., Dept. of Cumberland, on the Stoneman expedition through Tenn., Va., N.C., S.C., Ga, and Ala., March to June 1865. Daily maps hand-drawn by Sgt. Angelo Wiser.

Craig Swain
►To the Sound of the Guns: Detailed maps of brigade and regimental movements for Stoneman's Raid as well as other Civil War actions.
University of North Carolina Press
►2003: N.C. Civil War battles, 1865, showing routes of Stoneman's Raid and Sherman's campaign. Mistakenly shows Stoneman entering N.C. via Blowing Rock instead of Boone.
Charles H. Kirk
►1906: Map of the Principal Marches of the 15th Pennsylvania Cavalry in the Campaigns of the Army of the Cumberland
Gen. Luther S. Trowbridge
►1905: A Brief History of the Tenth Michigan Cavalry

Stoneman's Raid included five soldiers from the 15th Pennsylvania Cavalry who were later awarded the Congressional Medal of Honor:
Pvt. John G. Bourke: 1862 Battle of Stones River TN
Lt. Anthony Taylor: 1863 Battle of Chickamauga TN
Lt. Everett Anderson: 1864 Battle of Crosbys Creek TN
Gen. William J. Palmer: 1865 Battle of Red Hill AL
Col. Charles M. Betts: 1865 Raid near Greensboro NC
Another member of the 15th Pennsylvania, John Tweedale, also received the Medal of Honor for the 1862 Battle of Stones River. Tweedale may have been involved in preparations for Stoneman's Raid but was reassigned three weeks before the march began.
NOTE: I have searched for Medal of Honor winners among the other seven regiments that participated in Stoneman's Raid, but I have not been able to identify any. If you know of someone who should be listed, please leave a comment.

Visit my other blogs